I recently facilitated a workshop for a client who was grappling with the issue of organisational values. In initial discussions we agreed that the values were meaningless if just posted on the wall as words.  What one word means to one person means an entirely different thing to another. What emerged as important was the underlying behaviours that either supported or detracted from the espoused value.

The other complicating issue was that the values as yet had not been agreed. This was  symptomatic of how various sections of the organisation saw their identity as even though they were all the one organisation, their employment conditions and who they were employed by were completely different as were the jobs they undertook.

So a decision was taken to work with the underlying behaviours in the form of narrative and metaphor. The Organizational Zoo techniques developed by Arthur Shelley were the tools of choice for the metaphor.

Participants were encouraged to share stories in response to stimuli and then choose a positive story to which they applied the Organizational Zoo metaphor. Through the use of the animal cards they were able to identify positively contributing behaviours and behaviours that detracted from the story. As a whole group they then designed their own Organizational Zoo.

This brought about a number of benefits and quite exciting results. One was the open and rigorous conversation that took place about appropriate behaviours and the group decision that was reached about what was ok or not. Secondly there was emergent use of other metaphor to talk about situations. For example they wanted to use the instruction cards in the box of cards as part of their Zoo as this represented the legislation on which their work was based!!! And there was also the emergence of values that the group agreed to. These were their own,with an understanding of the underpinning attendant behaviors.

It was also fascinating to see how many drew characters as well as having the conversation. The drawings seemed to stimulate conversation and dialogue within their small groups. Below is an example of the drawing which is amazingly accurate in terms of the characters developed in the Organizational Zoo!!! 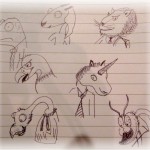 The organisation now has their own Organizational Zoo to refer to metaphorically in terms of what they want to be and are continuing the conversation to strengthen the understanding.

One Response to Organisational Values and Behaviours